2020 has been an interesting year for bitcoin mining activity. Recently the largest digital currency by market cap neared all-time highs, trading around $16,000 per coin. Earlier in the year, exceptional volatility brought on by spreading COVID-19 cases in March, caused bitcoin to decline 40% in a matter of days. Just a few months after this crash, the bitcoin network then underwent one of the most anticipated mining events in the past few years, the bitcoin ‘halving” which occurred in May. Given the banner year 2020 has been, we charted out bitcoin mining profitability estimates over the year and highlighted some of the key takeaways.

This changed in March when a COVID-19 inspired market crash resulted in a considerable decline in the market price of bitcoin (TradeBlock XBX Bitcoin index prices shown in the figure). For a brief period of time, estimated bitcoin mining margins went into the red during the crash, as shown below. 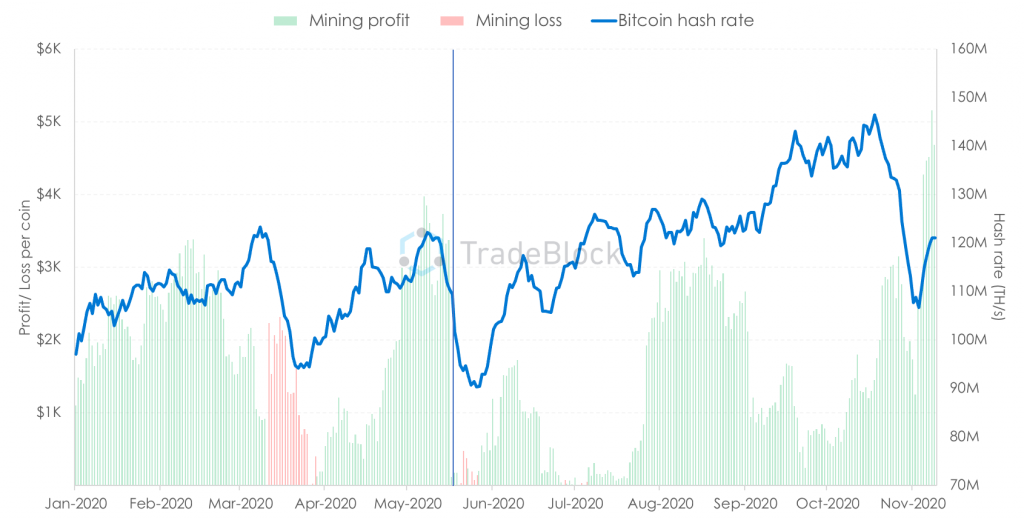 After the market crash in March, the bitcoin network hash rate, and difficulty declined considerably as miners, in the aggregate, reduced resources dedicated to mining as profitability declined. As the difficulty declined, miner break-even points also declined allowing miners to once again return to higher profit margins. During this period, the network hash rate declined from 120 million TH/s to just over 95 million TH/s in one of the largest crashes in the network’s history. Our mining assumptions which were used in the profit/loss estimates for Q1 2020 are delineated below:

Bitcoin mining margins during the May ‘halving’
Leading into the bitcoin halving in May, new and more efficient mining devices came online. This had the effect of enhancing profit margins but we also saw increased resources dedicated to the network, with hash rate and difficulty rising into the halving. These mining assumption cost variables are delineated in our mining report which was published earlier this year.

After the May halving date, the mining reward declined from 12.5 bitcoins per block to 6.25 bitcoins per block, resulting in 900 new bitcoins mined per day. This had the effect of diminishing mining revenue by nearly 50%. With mining difficulty remaining elevated heading into the ‘halving’, yet revenues expecting to be cut in half, miners were looking at an effectively 2x increased breakeven point.

As such, we estimate that mining profitability fell considerably after the May halving. Correspondingly, the bitcoin network hash rate began declining after this period of time as well as miners cut resources dedicated to the network. In the figure below, the blue vertical line represents the ‘Halving’ event.

Figure 3: Estimated bitcoin mining profits/losses during the May ‘Halving’

As shown in the figure above, the bitcoin network saw three large hash rate declines. The first coming during the March COVID-19 crash (as we previously discussed), the second coming around the halving, and the third occurring recently with the wet season end in China and prior hash rate all-time highs which drove input costs higher than expected.

In May and June, the market price of bitcoin remained steady yet miners were now receiving half as many rewards. As such, mining margins remained compressed during this period of time, but were offset to an extent by the lower mining difficulty. As the wet season progressed in inner regions of China, where a large number of commercial mining farms are located, lower electricity costs allowed miners to see increased profit margins.

Bitcoin mining profitability in recent months
During the summer and fall months of 2020, the market price of bitcoin soared rising from around $5,000 in March to nearing $16,000 in October/November. The rise allowed miners to see increasingly healthy profit margins. Alongside the price rise, more mining operators launched and more resources, in aggregate, were dedicated to mining activity pushing the network hash rate to a new all-time high in October.

However, in recent weeks the wet season in China has come closer to an end which pushes up electricity costs. With mining hash rate and difficulty at all-time highs and electricity costs rising, miners saw their input costs rise, which compressed mining margins eventually leading to the most recent hash rate decline. Over the past few days, at lower difficulties, miners are estimated to be back at healthier margins, especially as the market price of bitcoin continues to push higher.

If this report were forwarded to you, and you would be interested in receiving more research, subscribe here.

Malcolm X warned us about Joe Biden and The Democrats

A Little Background Information About Us The Art Department specializes in media production for artists and businesses. Photography and layout design for print advertisements have been a main source of income since 1993. Video and film production were added in 1995 in order to meet the growing demands of our customers. In 1996, we began producing music for several local artists and in 2001 we became a full-fledged production company with all the components to create, publish and distribute any audio, print or film project. Some Of Our Clients Include Glynn Jackson Productions, Harvey Star Washington Productions, Rocafella Records, Hummer, Cadillac, N.O.A.A., Honey Magazine, Citibank, The Army Corp of Engineers, Vitamin Water, CarMax, Opnet, Johnson & Johnson, The WNBA, And1, Starbucks, Pepsico, Levis, H&M, Jos A. Bank, and many more. We are Your One Stop Advertising Solution If you can imagine it we can do it. From still photography for modeling portfolios and product shots for print advertisements to TV commercials, 3D Animations, music videos, and live event coverage. Give us a call so we can find the proper solution for you or your business. For more information call (202) 709-8068

3 Cool Gadgets – You Can Only Pick One.